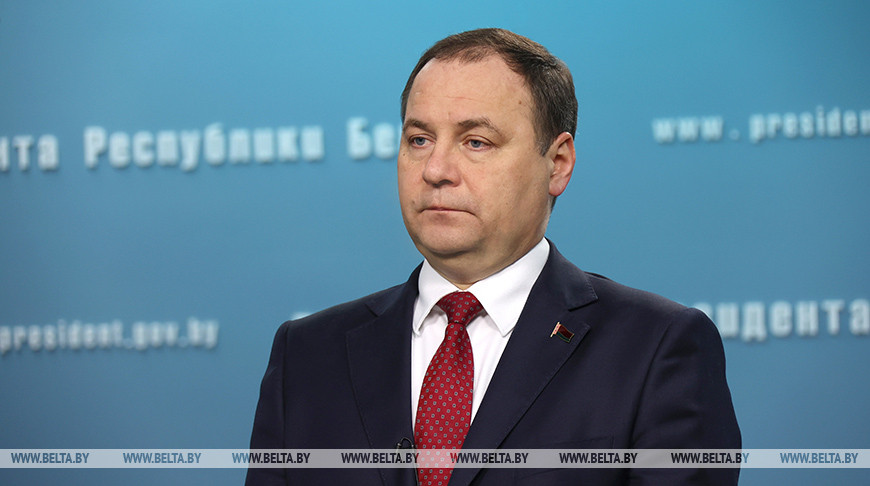 MINSK, 12 January (BelTA) – The policy in favor of integration with Russia is generating economic dividends for Belarus. Prime Minister of Belarus Roman Golovchenko mentioned it during a government conference hosted by Belarus President Aleksandr Lukashenko to review the fulfillment of integration programs of the Union State of Belarus and Russia, BelTA has learned.

Roman Golovchenko is convinced that the previously adopted policy towards integration with Russia and towards the realization of Union State programs had been the right and timely move.

Roman Golovchenko reminded that back in the day the programs were discussed and adopted in a slightly different geopolitical environment. “I don’t think it is a coincidence that we’ve chosen this policy, that we’ve followed this path that is now generating certain economic dividends for us. It is a deliberate decision made by the heads of state. They identified the movement trajectory, the tasks that the government agencies in charge of realizing the Union State programs face. The government is united in the opinion that the programs are working for the benefit of Belarus,” the prime minister stressed.

Speaking figuratively, Roman Golovchenko noted that the government conference hosted by the head of state had “pronounced the final diagnosis”: in the course of implementing the Union State programs Belarus lost not a single gram of sovereignty and continues making decisions in the social and economic sphere at the national level absolutely on its own.

According to Roman Golovchenko, both Belarus and Russia are advancing quite well in the realization of the Union State programs. As many as 7 programs out of the 28 ones have been fully implemented. “Work on so-called energy programs is going more slowly. We initially knew it would and were ready for it,” the prime minister said. The fundamental institutional approaches to how the joint markets of natural gas and oil are supposed to operate represent the main stumbling block. “We are now talking about some system, which will work later on and will not require the adjustment of some parameters, let’s say, every year or every three years,” he added.

The prime minister reminded that work on the Union State programs with regard to taxation and customs regulation had been complicated, too, but they had been realized in the end. The same will happen to the energy programs, Roman Golovchenko is convinced. “We will complete this work anyway. It is not very simple. Although work on taxation and customs roadmaps was difficult, too. When we started doing it, we had many more questions and ambiguity than answers. But today one can state the agreement on indirect taxes has been signed. The head of state was informed about it in detail today, including about Belarus receiving quite substantial financial results thanks to the realization of the steps the agreement specifies,” Roman Golovchenko said.