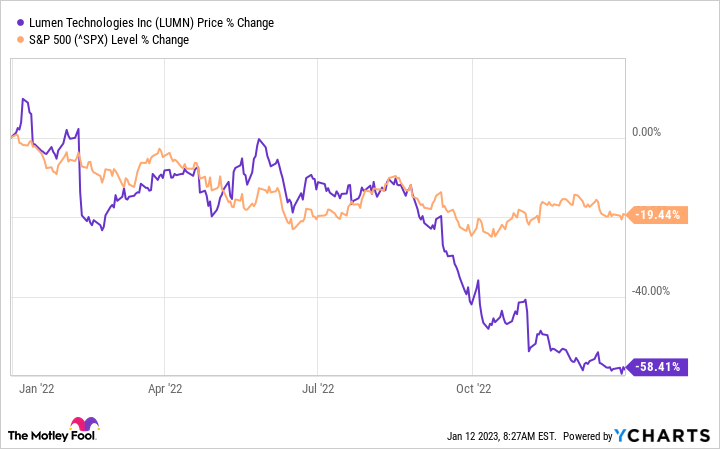 Amid macroeconomic pressures including inflation and rising interest rates, Lumen’s stock lost ground in conjunction with the broader market last year. The company also made a decision late in the year that shocked investors. Due to high levels of debt and the capital-intensive nature of its business, the company announced with the publication of its third-quarter results in November that it would be suspending its dividend — causing its share price to plummet.

Rising interest rates  have crushed valuations for stocks and it means that companies with high levels of debt or the need to secure funding through new loans now face elevated expenses.

Lumen’s high dividend yield had been one of the main reasons that many investors owned the stock, and the abrupt removal of the returned-income component prompted a substantial pullback. But suspending the dividend could be the right move for the long-term strength of the company.

Lumen currently has a market capitalization of roughly $6 billion, and it ended its third quarter with total current liabilities of roughly $8.71 billion and long-term debt of nearly $22 billion. Thankfully, the telecom is still serving up strong free cash flow, and it’s in the process of becoming a much more focused business. In the third quarter, the company completed the sale of its Latin American unit in a $2.7 billion deal. The subsequent quarter saw it sell its incumbent local exchange carrier business for $7.5 billion.

Lumen’s fiber-internet business is posting strong performance and helping the company generate encouraging levels of free cash flow, but management clearly sees the need to get its balance sheet under control.

Aided in part by recovery momentum for the broader market, Lumen stock has regained some ground early in 2023. The company’s share price has climbed roughly 11.5% year to date.

Lumen’s midpoint guidance called for roughly $2.3 billion in free cash flow for its December-ended fiscal year, and the stock looks non-prohibitively valued as it trades at roughly 7.6 times expected earnings, but there are some significant challenges for the business on the horizon. Near-term sales performance will be pressured by divestitures, and rising interest rates will continue to tamp down earnings with debt still at high levels.

After having fallen precipitously in the current bear market, Lumen stock has strong rebound potential, but trading could continue to be choppy in the near term.