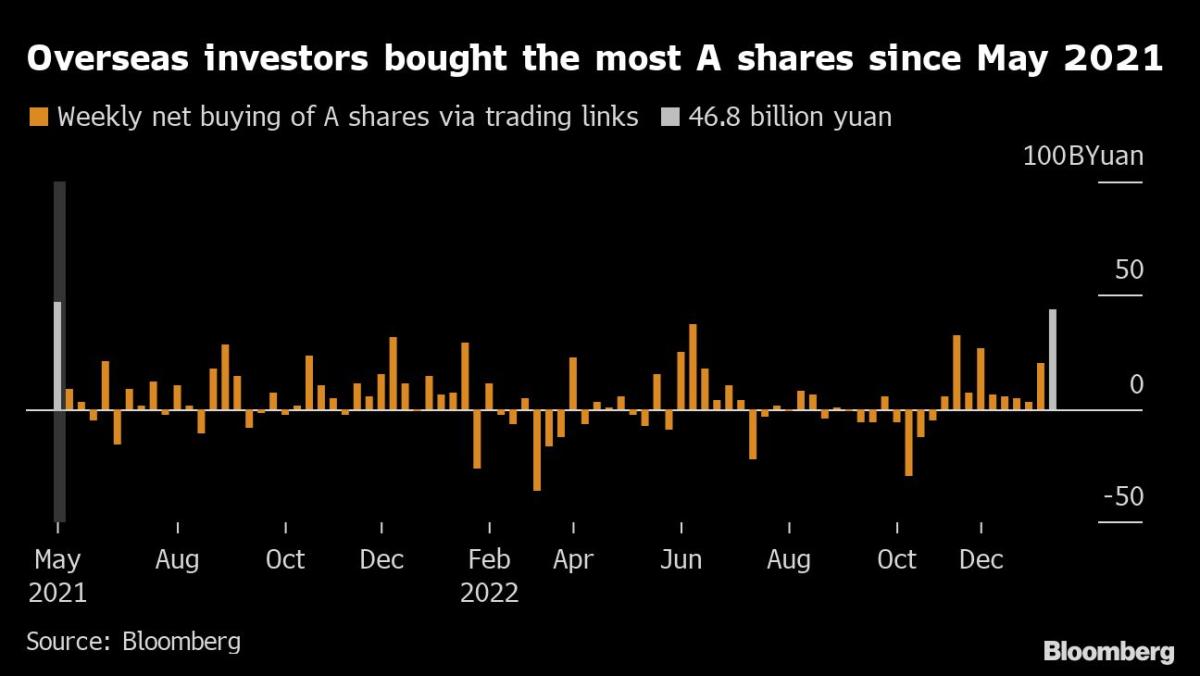 (Bloomberg) — Global investors are snapping up Chinese blue chips from large consumer staples to financial firms again as the nation’s stocks rally on optimism about a reopening from Covid curbs.

Most Read from Bloomberg

Anticipating a demand rebound, foreign investors have bought about 12 billion yuan ($1.8 billion) of liquor firm Wuliangye Yibin Co. via a trading link with Hong Kong in 10 weeks through Jan. 10, followed by more than 10 billion yuan worth of spirits maker Kweichow Moutai Co., according to data compiled by Bloomberg. They also bought a similar amount in Ping An Insurance Group Co. of China during the period given expectations of benefits from Beijing’s property rescue efforts.

Such purchases have helped push the benchmark CSI 300 Index to its highest level in almost five months.

The recent rally in China’s stock market underscores expectations of a rebound in the nation’s economy when most developed countries are seen heading into a recession. Overseas funds’ return to the country’s value stocks reflects their confidence in the economy after lockdown-induced economic weakness tilted them toward growth and cyclical names.

Contemporary Amperex Technology Co. and Midea Group Co. are also among the major companies benefiting from the buying spree. The wave of buying has helped the CSI 300 outperform other major onshore stock gauges, advancing 18% from its October low — a performance that outstrips the Shanghai Composite’s 12% rise during the period.

Though it’s still far from the MSCI China Index’s 50% rally, a surge in trading turnover on Monday showed there’s more room to run. Foreign inflows reached about 44 billion yuan last week, the most since May 2021, and overseas investors bought another 15.8 billion yuan worth of A shares Monday, the most since mid-November and making it the longest buying streak since June last year.

–With assistance from Mengchen Lu.

Most Read from Bloomberg Businessweek