What’s more, all three growth stocks could work well in a diversified portfolio. Tesla offers exposure to electric vehicles (EVs). And down the road, it could make strides in robotics, artificial intelligence, self-driving software, and renewable energy.

MP Materials is a much smaller company that operates a rare-earth materials mine. And Bentley Systems is an infrastructure-engineering software company. Here are three Motley Fool contributors to tell you what makes each company worth considering now. 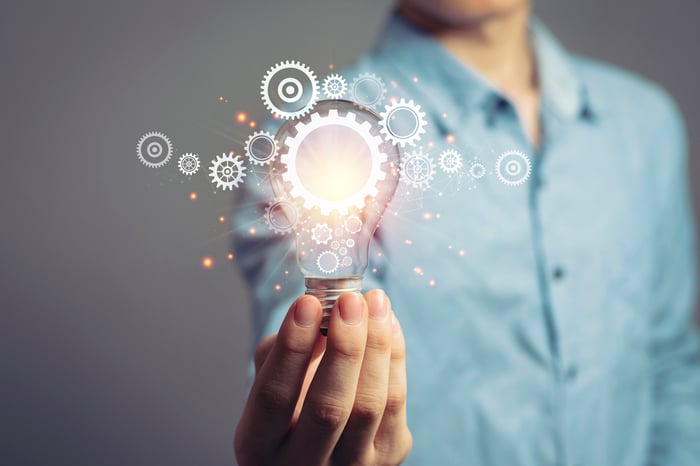 Tesla can finally get back to beating manageable expectations

Daniel Foelber (Tesla): In 2022, Tesla suffered its worst calendar-year drawdown in its history. When a company loses nearly two-thirds of its value in one year, it’s hardly ever due to deteriorating fundamentals alone. Rather, its sell-off, like those of many growth stocks in 2022, can be attributed mainly to its previously expensive valuation.

But an added layer of trouble for Tesla came from a whirlwind of developments, both operationally and with its management, that caused investors to question its ability to sustain its growth rate and deliver on its promises.

The silver lining is that as the dust settles, Tesla finds itself at a valuation that seems a lot more reasonable. It has a net cash position on its balance sheet, which is virtually unheard of in the auto industry. It’s also free-cash-flow positive, highly profitable, and growing at an impressive clip even as the auto industry faces declining demand. So as a company, Tesla is doing very well even though its stock price is faltering.

The biggest question facing Tesla is whether or not it can keep up with rising competition, as legacy automakers are eager to take a slice out of the growing EV pie. And an added concern is CEO Elon Musk’s mishandling of his acquisition of Twitter and worries that his skill set is spread too thin among SpaceX, Tesla, and Twitter.

Tesla has always been chock-full of potential and some glaring risks. Even after its sell-off, the company has a lot to prove if it wants to stay a $400 billion company, let alone surpass a $1 trillion market cap again.

For many investors, Tesla is simply too volatile and not worth the risk. But for risk-tolerant folks with a long time horizon, the case for the stock is arguably far easier to make now than at any other point in the company’s history.

Scott Levine (MP Materials): With the S&P 500 plunging 19%, there’s no denying that 2022 was tough for investors. Those with MP Materials in their portfolios, however, found last year especially painful, with shares of the rare-earth metals producer plummeting 47%.

Beating analysts’ quarterly revenue and earnings estimates in each of the first three quarters of 2022, MP Materials (and its investors) had a lot to celebrate last year. The stock’s decline, though, belies the company’s strong performance.

Evidently, analysts were pessimists regarding the stock, and there was speculation that Apple‘s interest in procuring metals from recycling could be a harbinger of reduced demand for rare-earth elements. The stock’s sell-off, however, seems excessive, leaving patient forward-looking investors with a great buying opportunity.

MP Materials expects big things in the coming months. In April 2022, the company inked a long-term supply agreement with General Motors. Under the deal, MP Materials will provide GM with rare-earth materials, alloys, and finished magnets for electric motors beginning in late 2023 with the development of the company’s Stage III factory.

While lithium gets the lion’s share of the attention, EVs and other battery-powered modes of transport are dependent on rare-earth elements — an indispensable component of the batteries.

MP Materials’ Mountain Pass asset in California is the only integrated rare-earth mining and processing site in North America. This puts it in a unique position as the United States looks to shore up its rare-earth elements supply. As consumer enthusiasm for EVs continues to accelerate, the company should prosper accordingly.

Lee Samaha (Bentley Systems): Shares of this infrastructure software company were sold off by 24% in 2022, along with much of the software sector. While you can blame overvaluation, it’s harder to make the case that Bentley’s long-term growth prospects were damaged last year.

On the contrary, the federal $1.2 trillion infrastructure bill improved its long-term prospects considerably — and it’s the long term that matters for growth stocks.

The investment case for Bentley Systems — its modeling and simulation application software, and project delivery systems — isn’t only based on the outlook for infrastructure spending. Instead, its main earnings driver is the increasing adoption of its software (Bentley is the market leader in infrastructure software) across the industry.

Historically, infrastructure projects like bridges or hydroelectric dams were designed and built by many consultants, contractors, and project management engineers. Each engineer would create a share of the work and keep the data in files, usually in 2D format. The physical projects were then maintained by using this data for many decades afterward.

In this example, it’s easy to imagine a mass of information held disparately. So it wasn’t very certain to be used to complete the project in a timely manner or maintain it for decades afterward.

Bentley Systems solves all these problems by helping engineers create a digital workflow (across engineering disciplines and sectors) that can be used to model and simulate data — previously held in many separate files — during the project’s construction and use. For example, a digital twin can be created to use data from a physical asset and then digitally simulated to maintain the assets better.

Bentley Systems compiles a lot of detail work that could add up to multibillion-dollar savings on cost overruns associated with infrastructure projects — and later on, billions in reduced maintenance costs on the projects.