The medieval city of Brugge in Belgium is famed for its chocolates, lace and cobblestone streets. (Photo dated to around 1898, via Wikimedia Commons)

The silence is deep, sacred, broken only by the distant hooting of a wood pigeon. Two nuns approach: one as gnarled as the roots of the ancient trees that cluster in the grove, the other butter-cheeked and youthful. I step aside to let them pass, my eyes downcast in apology for having intruded upon their chosen lives of solitude and prayer. The younger one flashes me a distinctly un-nun-like grin.

Dressed in long black robes topped with white habits, these Benedictine nuns offer a looking glass through which to peer through the centuries to the beginnings of what was arguably the first feminist movement in the world: that of the beguines.

I am standing in the white-bricked environs of the beguinage in the Flemish town of Brugge (or Bruges, as it is called in French). As my guide explains, beguines were women from the Low Countries who from the 12th century on began to live in communes called beguinages, forming self-help groups that allowed them a life independent of both the care of a man and the vows of the church.

Consisting of a motley crew of widows, wives whose husbands were fighting abroad in the crusades and spinsters, what beguines had in common was a certain religious-mindedness and a desire to control their own lives. Beguines made lace, worked as hospital nurses and teachers, gave lessons to children and carved out a space in society for themselves as pious, independent women, almost unimaginable in the patriarchal world of the time. A beguine was free to leave the beguinage and get married, unlike a nun who was bound by vows to the church for life.

The last beguine to live in the Brugge beguinage, now a Unesco world heritage site, died in the 1920s. Since then, two dozen or so Benedictine nuns have taken up residence here, a space they are compelled to share with throngs of tourists.

Brugge is the quintessential tourist paradise. Virtually all of the 20,000-strong local population work in occupations that cater to the 3 million-plus tourists who flock to this medieval city famed for its chocolates, lace and cobblestone streets.

Already the mainstay of Belgium’s tourist industry, Brugge’s fortunes were given a fillip by the 2008 Oscar-nominated movie In Bruges, ensuring that even the global financial crisis did little to disrupt the steady trundle of visitors that march around the picture-perfect town all year long.

This brush with tinseltown is something the local authorities are keen to extend eastwards — to Bollywood. Anne De Meerleer, an official with the Brugge Tourist Office, reveals that the town has been sending out feelers to the Indian movie industry. “We know that Switzerland is the preferred destination for many Bollywood films, but we think Brugge can offer a fresh, new location,” she says, smiling.

I picture Kareena Kapoor careening across Brugge’s main square, framed by the neo-gothic buildings that flank it. It’s certainly an interesting image.

Bollywood actresses need be forewarned, however, that any trip to Brugge is likely to end in a fair bit of extra belly bulge. The town advertises itself as the world capital of chocolate, a well-deserved moniker as evidenced by the fact that it is home to a mouth-watering 54 chocolate shops.

The result is a town that feels edible. Everywhere I walk (and this is largely a pedestrian town), the air is scented with vanilla and coco. I have to resist attempting to take bites out of the churches and bridges.

At Sukerbuyc, Brugge’s oldest chocolate shop, the chocolate is mixed on site in a room at the back. The place smells like a gooey slice of heaven.

Mr Sukerbuyc, who runs the outfit along with his wife, recalls how when he started up the business back in 1976, people scoffed at him. “‘A chocolate shop?’ they would say. You’ll never survive.” Today the much-vindicated chocolatier has expanded his business to include a tea shop right across from his chocolaterie. I sip a cuppa accompanied by a whirl of confectionery. It’s just the pick-me-up I need before my next appointment at the city archives. 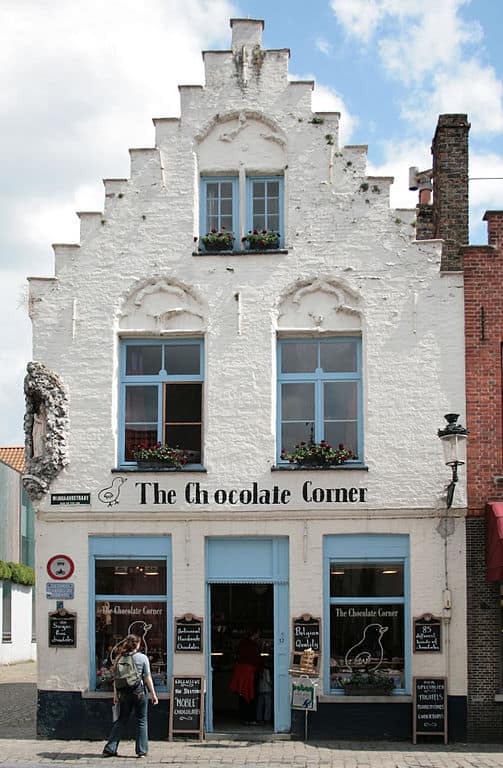 There are 54 chocolate shops in Brugge. (Photo via Wikimedia Commons)

I meet with Noel Geirnaert, the town’s head archivist, in his office. He has the pale skin of one who spends a lot of time indoors reading heavy books. Unsurprisingly he has several such books to show me: gorgeous leather-bound tomes of parchment and paper dating from the 13th and 14th centuries.

“Look,” he says with the excitement of a child at an ice-cream van. “This one belonged to one Guillaume Ruyelle, an Italian merchant. It shows how sophisticated bookkeeping was even back then.” I stare at the carefully recorded numbers and spiky writing across the page; a whisper from the distant past when Brugge was not merely a tourist attraction but the financial centre of Europe, a city where great fortunes were made and lost and merchants from the far ends of the continent congregated to conduct their business.

Medieval Brugge’s success lay in the access that the river Zwyn gave it to the sea. As goods began to be transported by ship rather than overland, the town’s port expanded and it was soon the gateway to all the major industrial and agricultural products of Europe. It attracted merchants and bankers from the great Italian trading cities of Venice, Genoa, and Florence. It then became the overseas headquarters of a vitally important group of trading towns of northern Germany called the Hanseatic League which controlled all the commercial activity of the Baltic and the North Seas. It was in Brugge that the old barter system of trade was replaced by a modern system of cash and credit. And it was also the home of the first stock exchange in the world. I walk across to the house that used to function as the Van der Buerse family inn. This is the building where the first stock exchange is believed to have evolved, as commodity traders who gathered in and around the inn gradually institutionalised their once-informal meetings. Hence the words for “stock exchange” in French, bourse, and in Dutch, beurs, derive from the innkeepers’ family name, Buerse.

Today it is home to the local radio station and more people visit the next door “frite” or French Fry museum (French fries are actually Belgian fries, a sore point in Belgium) than this womb of stocks and bonds.

It’s time to bite into one last chocolate and bid farewell to this marvellous town. As I walk back to the train station, a horse-drawn carriage comes clippity-clopping by. I am reminded that the stock exchange is not the only gift bestowed by Brugge on the world.

It is also the place with the distinction of having invented an arguably even more useful contraption: horse diapers. One end of a nifty little cloth bag is attached just under the horse’s privates and the other end is attached to the front of the carriage, ensuring that “picturesque-ness” in this town comes horse-poo free.